I have three kilns - a small electric kiln I use for biscuit firing, and two gas kilns.  The smaller of the two gas kilns came from Aldermaston Pottery, and is to a design by Andrew Holden.  At Aldermaston it was used to fire mugs. I have rebuilt it, and it has now done over 250 firings, and is on the fifth version of the lid! Each firing uses about 20% of a 47kg bottle of propane, so it's quite economic, but the small packing space limits the number of large pots that can be fired at once.

The larger of the kilns is based on a Joe Finch design, with a few modifications. It is a downdraft kiln of about 20 cu ft, with about 10 cu ft of packing space.  It has been a bit intermittent in performance, but I've just had a go at the burners, and they now seem to be working correctly, so we shall see. It holds a lot more work than the smaller kiln, and uses at least one bottle of propane per firing, so probably costs about the same per piece of work! 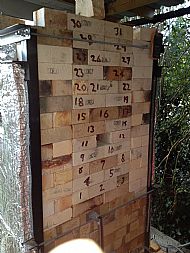 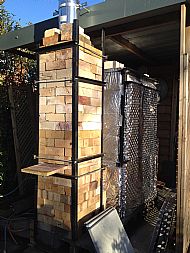 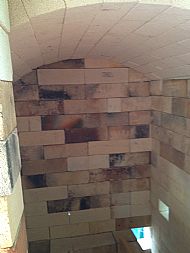 Inside the large kiln - no shelves 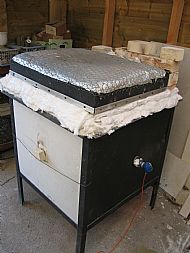